Got a Tektronix 2215 on craigslist for $50. It was really dirty and slightly out of cal but not too bad. Pretty cool lightweight portable scope from 1982. I was a little disappointed in the display at first because it wasn’t as clear and nice as some of my other Tek scopes. There is a focus control but astig was nowhere to be found. It is actually a trimpot which is internal, R887. Helped a lot but was still slighly lacking in clarity. Doing some research led me to six 1 meg ohm resistors in the focus divider. Supposedly they are known to drift, R878-882 and R884. R882 measured 860K and was replaced. Paired with astig adjust the focus now looked pretty crisp.

Vertical gain was slightly off on both channels, both reading slightly low. I went through a bunch of test signals and cal’d the vertical gain against my self calibrating Tektronix TDS210 to dial it in.

Of course when you look inside it’s basically a work of art. Vertical gain adjustment trimpots are behind the CRT so you have to be very careful and use a non-conductive screwdriver when adjusting. That’s why there’s warning signs all over. CRT anode voltage is over 7000VDC. Bottom side of the board and you can see the 1 meg ohm resistor that was replaced. It was was easier to do it on that side of the board because there was a shielding on the top side that would have made it hard to get a soldering iron in. Oh well. More warnings of high voltage silk screened to the PCB so you know to beware. As with what seems to be all Tektronix gear it is amazingly supported with User Manual and Service Manual by Tektronix that are both hundreds of pages long, and literally tell you everything. 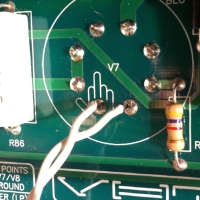 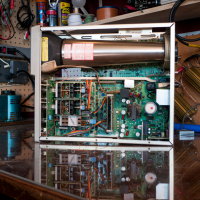 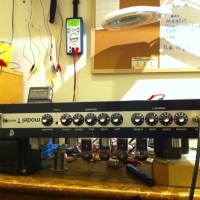 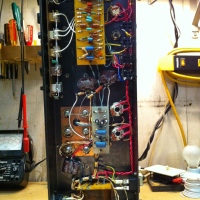