GIbson G10. This was a failed repair sadly. This amp had poor sound and a buzz. I went on an insane quest to find a MPF161 transistor and eventually found a replacement and the amp sounded very clean with extremely low noise floor! It lasted only 2 weeks and buzz came back, and its origin was never found unfortunately.

It is a solid state amp from the early 70s or so. Like most of these old SS amps of this era the output transistor is a 2N3055 — the standard, seemingly. 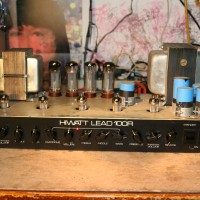