This is a kit amp made by Weber. It is a copy of a Marshall JCM800. Unfortunately expensive repair because the power transformer was shorted. The amp would blow fuses when turned on since all the wall voltage was being immediately dumped to ground.

This amp had a bias problem. It is not uncommon for push-pull amps to run one side of the output section harder than the other when pushed into clipping but it seemed excessive in this case. Two of the four red JJ EL34 labels were blackened. The phase inverter plate load resistors were reversed. This normally doesn’t matter but in this case it seemed to. Maybe because the coupling caps feeding the two grids of the phase inverter are different values?? Bias was more even when reversing the PI plate load resistors and matching the schematic.
It also oscillated at 20K when the master volume was up past 7, and had no grid resistor for V1 so there was lots of radio being picked up by the amp.
Adjusting the lead dress of V1, especially the the plate leads, rid the 20K oscillation. A grid resistor at pin 2 of V1 got rid of the radio. In the case of no grid stopper to buffer the signal, the wire from V1 to input jack, your guitar cable, and the guitar itself are acting as an antennae. 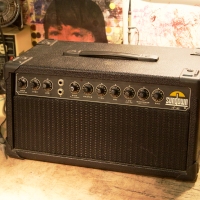